An Immersive Journey Into the Human Brain

This exhibit puts visitors in command of an awe-inspiring journey into the brain's physiology and complex inner structures. This experience starts outside of the brain and then dives into multiple microscopic levels that show more intricate structures, finally reaching down to the tiny molecular levels of complex neurotransmitters, showing how they diffuse across the neurons tiny synapse, causing the transfer of a nerve impulse across your entire body.

Our developers have perfected the art and science behind building professional grade interactive applications with clear and accurate detail. To maintain a smooth educational experience and to achieve the highest medical accuracy, we worked with specialized neurologists to design the perfect anitomically accurate 3D brain. This included 3D digital sculpting and painting of all brain assets and then using them to create of all animations for the software application.

Using the Unity 3D platform, we programmed and engineered this fully interactive brain exhibit application using C#. To create this custom application, it was necessary for the team to utilize advanced procedural programming workflows to make sure complex cellular processes are represented accurately. Our software engineering and creative services team spent more than a year designing and developing the exhibit’s most immersive and technically sophisticated experiences.

LARGE FORM FACTOR: Developed by IDEUM, includes large projection and control panel
The exhibit's size and detail make it possible for large groups to view the projected imagery together, and the integrated high-fidelity stereo audio system pulls users across the gallery into the inner-space journey.

This exhibit is on display at the South Florida Science Center and Aquarium.

It includes these features.

This price includes reskinning the user interface to work on your specific type of hardware, and 3 anticipated tech support calls once the exhibit is deployed. It also includes a 1 Year software support warranty. 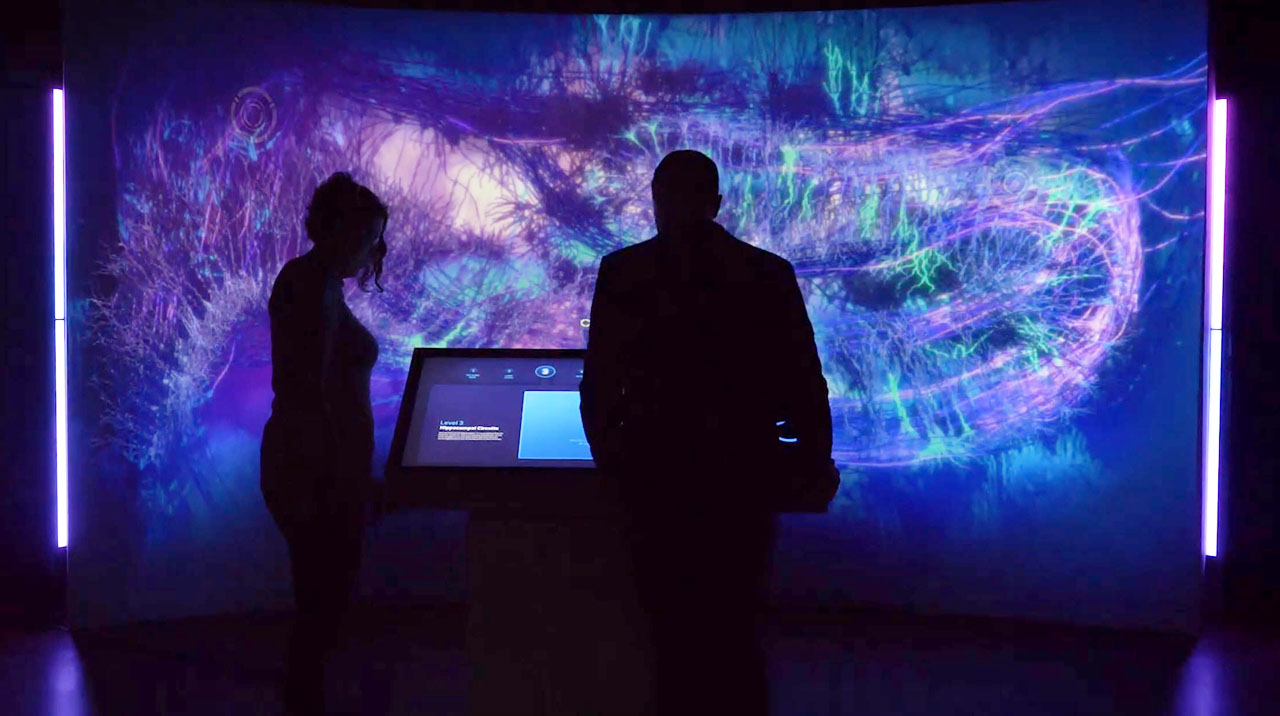 This large form factor includes these custom configuration options that can be changed in real-time.

This is a multifaceted installation, designed to put the marvels and mysteries of the brain at visitors' fingertips. The human brain is the most complex of all living structures in the known universe. Despite vast bounds in our understanding of the brain, it is still considered one of the least understood frontiers of the human body.

The human brain is the embodiment of all our experiences. All of our emotions, memories, and sensations are the result of approximately 86 billion neurons in the human brain working together. See the human brain in ways never before seen. By harnessing the entertaining aspects of immersive technologies and medical science, we bring the brain to life. This is a multifaceted installation designed to put the marvels and mysteries of the brain at visitors' fingertips. Originally opened at the South Florida Science Center and Aquarium and developed for large scale 4K display screens.

This exhibit opens with a gorgeous visualization of the brain's electrical activity. This is designed to attract users to this experience by looping continuously with ambient music playing in the background. Once the user engages the experience, you are then introduced to a beautifully rendered anatomically accurate human brain.

The Brain Odyssey begins showing the brain's exterior and then dives closer, revealing multiple microscopic levels and more intricate structures. Finally, visitors can zoom all of the way into the molecular structure of complex neurotransmitters, diffusing across the tiny synapses, causing the transfer of a nerve impulse. This experience also includes multiple supplimental videos for each level that explains other exciting details of the brain. For example: on level 01 there is an included video called "The Electric Brain" that shows how the cells of your brain use electrical signals to transfer information across your entire body.

Level 01: The Brain The first level has five areas of interest allowing you to interactively select the lobes and the cerebral vasculature areas to learn more about these areas; like the frontal lobe, which is the region of the brain that controls higher cognitive function.

Level 02: Limbic System This level highlights the Limbic System. It's located deep within the brain, so part of the exterior of the brain is removed so you can see the interior components. It's composed of four main structures: the hippocampus, the amygdala, the hypothalamus, and the thalamus.

Level 03: Hippocampal Circuits In the third level, we show an example of the relay of a synaptic transmission in the hippocampus. This shows how this loop interacts and travels to other parts of the brain. This influences human physiology and behaviour.

Level 04: Neurons The fourth level shows the many types of neurons and how they transmit information. Neurons are supported by glial cells, which get their name from the Latin word for “glue”. Also, you learn about Astrocyte Cells, these are the support cells that hold everything together.

Level 05: Synapse This levels focuses on the synapse. In a neuron, a synapse is the structure between two neurons that permits a neuron to pass a chemical or electrical signal to another neuron and has many working parts. Parts like the synaptic vesicles. These are like bubbles containing neurotransmitters that are released into the synaptic cleft in a process called “exocytosis”.